Haj Molla Hadi Sabzevari( 1212-1289 ), a philosopher, jurisprudent, mystic and poet inl 3th century(A.H) is considered as of the men oflslamic Iranian intellect and culture who has about 46 works.In addition to verses and traditions from anoccent ones(peace be upon them), his works are affected by four schools : verbal school of Shiite, Aristotelian reasoning philosophy, enlightened philosophy of Sohrevardi, and philosophical principles of mysticism,especially Mahy AL-DIN Arabi.Molla Hadi is also influenced by Molla Sadra in theology.Explaining the spiritual rhymed couplets of Molana is one of his worksin which he has analyzes Molana,s words in accordance with his own intellectual school to explain the complications of rhymed couplets in Molana,s words.Haj Molla Hadi makes the ambiguous expressins clear using the grammer and literature of the language; however, he clearly turns the hnterpretation of rhymed couplets into a kind of philosophical interpretation of Quran. The texts of the book are full of expressions which are very brief and mostly ambiguous, and in many cases, the rhymed couplets need explanations.He has exployed several verses and traditions as well as Arabic and Persian poems in interpreting the couplets.Most Arabic poems are from Imam Ali( peace be upon him), Ebn Parez and Mohy Al-Din Arabi which include mystic points such as unity of existence,the best system of a perfect man, epiphany, I am right(Ana Al-Hagh), and mystic poverty.Meanwhile, some verses of Emra Al- Gheis, Tarafa, Labid, A boo Novas, Abo Al- Ala Mari, Ebn Sina, mystic poets and Haj Molla Hadi himself are seen, and some couplets on Majnoon have been also considered. Regarding the name of the poet and his time , in some cases, are not clear, only a hemistich has been, sometimes,mentioned.The Arabic couplets have no translations and diacritics.In the presnt article, it seems necessary to analyze the mentioned subjects as well as mentioning the meaning relationships of Arabic poems with explanation of rhymed couplets. 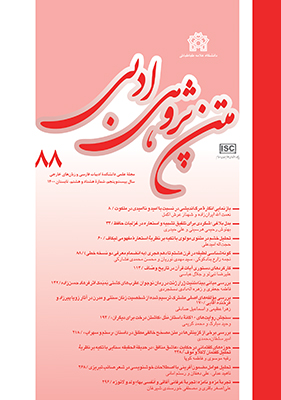